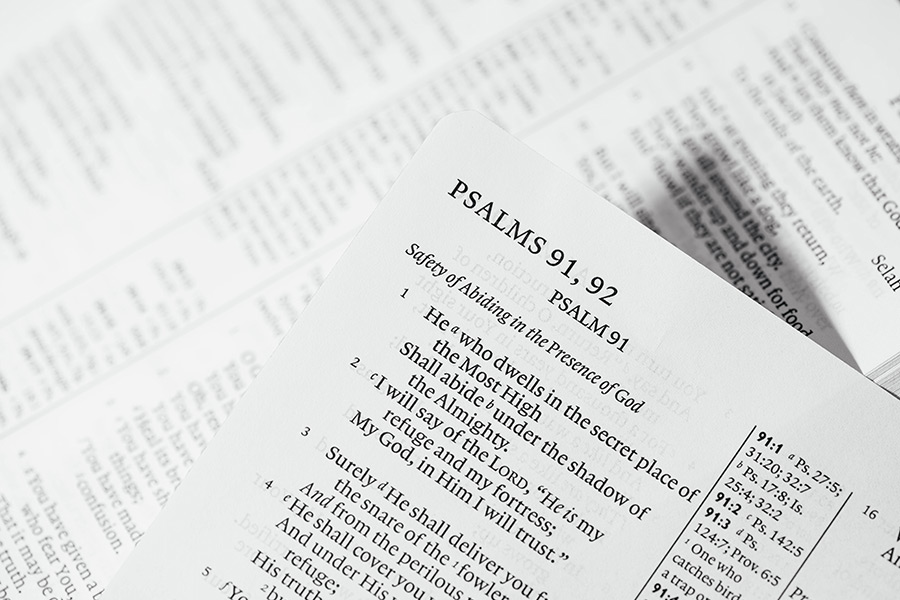 My recent blogs have been reviewing some tools we have been given for being strong in the spirit. I have seen great results when quoting aloud the 91st Psalm.

It is literally a power house of promises and provision, but like many of God’s provisions we need to be aware of them and claim them aloud for the forces of evil to hear them.

In addition, God works with His own word. In Isaiah 55:11, He tells us His word will not return void. Verse 11 of the 91st Psalm says He will give His angels charge over us – the condition is that we dwell in the secret place. I take this to mean regular time in our prayer closet, wherever that may be, as well as living in His presence as we go about our daily life.

My husband and I were on an island in Hawaii a couple of years ago and were going to dinner when he said, “I think I am having a retinal detachment.” I had him lay down on the bed and quoted the 91st Psalm over him believing in the power of the spoken aloud word of God and the promises in this passage of Scripture.

Following this we sought medical help and found there were no Ophthalmologists on the island. If it were indeed a retinal detachment, it is dangerous to fly due to the cabin pressure, but we had to get to the main island for medical evaluation.

Our daughter had medical contacts who recommended a doctor in Honolulu. As soon as his office opened the next morning we were able to get an appointment with him, fly over to the island and see him. The next day the doctor was going on a trip for two weeks and we would not have been in the office. While sitting in his waiting room I saw a very extensive array of published articles and research finding he had published. He was at the very top of his field. The expert!

He assured us it was not a retinal detachment but a film behind the eye that slips down as one ages causing temporary cloudy vision. It was safe to fly and we were out of there the same afternoon to fly home that night.

The timing of this episode was unbelievable, and we know it was God’s provision. In addition I was able to witness to the hotel personnel who could not have been more concerned and helpful in arranging our air flight and helping me with the luggage which my husband could not risk lifting.

I encourage my readers to study this Psalm and commit it to memory so you can have it in your spiritual toolbox to pull out and quote when dangerous, challenging situations arise.